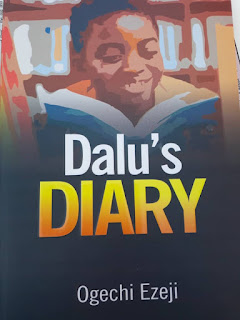 I felt like a child once again, after reading Ogechi Ezeji’s Dalu’s Diary, a book of fiction for children and adults alike.The feeling I got from reading this work is akin to the one I got from reading Chinua Achebe’s Chike and the River, Onuora Nzekwu’s Eze Goes to School, Cyprian Ekwensi’s The Drummer Boy and all other great children fictions of Nigeria’s literary golden age, so many years ago.

In the story, little Chukwudalu Aniche is obsessed with his diary, which he kept and wrote in at every turn of an important event that moves him to write. He initially lived in Owerri with his parents, Mr and Mrs Aniche and his beloved uncle Akachi, before his accountant father was transferred to Abuja, on account of his honesty and determination towards his job.

Through Dalu’s diary, we are able to understand the inner workings of the young boy’s mind, his family, his closeness with his uncle, his view of his maternal aunt and her erratic daughter and most of all, his perception of his new school in Abuja, his class teacher, the head teacher and the school environment. Dalu strikes one as a young boy with ancient mind: super curious and hungry for knowledge; intelligent; obedient; hardworking and ambitious – judging from the kind of brilliant and probing questions he poses to his uncle or parents or teachers, as well as his insistence on keeping a diary, which his parents initially thought he was too young to keep. Well, he got the “beautiful blue diary” as a birthday gift from his uncle and proved his mettle in its constant usage and the amount of care he lavishes on it.

Dalu is determined to set a very high standard in his new Abuja school, Belle Brook Academy, seeing that the school rewards outstanding students in learning, arts and sports, with a photo space in the school’s “Hall of Stars”. He’s even more fired up when he notices that the class teacher gives preferential treatment to some of his classmates whose photos were already there. A competition soon materializes from the stables of an international organization; students are required to participate in a writing and speaking competition of their various mother tongues. Dalu, at his young age, is fluent in Igbo, Yoruba and English, as a result of his Igbo paternal roots, his Yoruba maternal roots and his English schooling environment. He goes on to win the competition for the school and is selected to represent Nigeria at the international version of the competition. By bringing such great honour to his school, he is rewarded with a photo space in the school’s “Hall of Stars”, and quickly rose to become a language icon, offering to teach his classmates the languages, not minding that he was the butt of their jokes earlier.

The writer, Ogechi Ezeji is a writer with sharp eyes and ears for fine details in relation to what it means to be a writer of fiction for children. With this children’s story, she has secured a seat in the gathering of writers whose sincere literary preoccupation is to write for children, as against opportunists who are masquerading as children’s fiction writers, whereas they fall flat of that appellation. The truth is that it takes more time and energy to put up a body of work that children can relate with and relish with great pleasure. One has to wear the shoes of a child, walk in those shoes and understand the child’s mind and go ahead to write it out. Those are the hallmarks of a good children’s fiction writer, coupled with down to earth diction; such that kids would easily understand at first reading, vivid illustrations that picturesquely captures every important plot line, for the child-readers’ easy assimilation, as photos are wont to sink faster and grip or retain their attentions more. Ogechi captures these important prerequisites in her execution of this beautifully remarkable project, delivering the story in bold prints and fast-paced narrative, culminating into a sweet page turner for children and which could also turn adult to kids in that short spasm of immersion.

In a nutshell, Dalu’s Diary is all shades of beauty and sweetness. It is a not just a fictional book, it is a combination of socio-cultural, political and literary history that prepares the child-reader for a beautiful excursion around the world, African world, Nigerian world. The book pays touching homage to Chinua Achebe, Nelson Mandela, Dr. Stella Adedovah, Nigeria’s founding fathers, Nigeria’s indigenous languages, etc. The didactic nature of the book is even more outstanding as the book, through transparent themes, encourages hard work, honesty, family love and unity, the role of a healthy and responsible family to nation-building, national coexistence, etc.
All these and many more designate the book as nearly flawless.